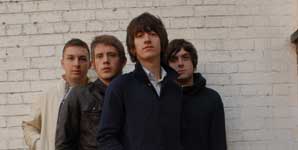 Sheffield quartet, they are set to release the third single from ‘Favourite Worst Nightmare‘. ‘Teddy Picker’ will be released on Monday the 3rd of December through Domino and will be available on 7”, 10”, CD and via usual digital outlets. It is backed with B-sides ‘Bad Woman’(a cover of the 1969 Pat Farrell And The Believers track), featuring Richard Hawley on vocals, ‘The Death Ramps’ and ‘Nettles’.

Nobody can accuse Arctic Monkeys of not working hard. 2007 so far has seen the band’s highly anticipated and critically acclaimed second album ‘Favourite Worst Nightmare’ top the charts, the release of the drum-driven first single ‘Brianstorm’ and it’s video of booty shaking delights, and of course the summer anthem that was ‘Fluorescent Adolescent’. The band have taken home countless awards and toured the world playing sell-out shows.

This release will be closely followed by 6 very special UK shows in December which have already sold out;