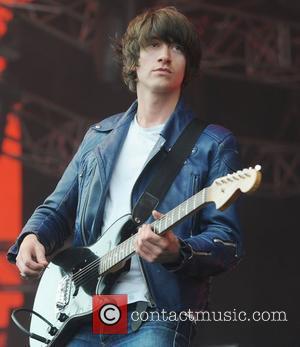 British rockers the Arctic Monkeys surprised fans by inviting Miles Kane to join them onstage during their headlining slot at the U.K.'s V Festival on Saturday night (20Aug11).
The Rascals rocker, who plays in The Last Shadow Puppets with Arctic Monkeys frontman Alex Turner, joined the group onstage during their closing track 505 at the Chelmsford, Essex event.
Turner introduced Kane by telling the crowd, "We'd like to bring a blue mod onstage to help us with this last one. Here he is, the Wirral riddler, Mr Miles Kane."
Kane then sang along with the band to close its debut appearance at the British festival.