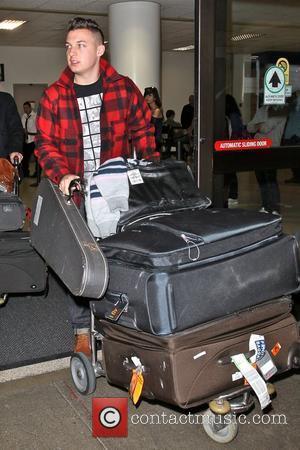 Arctic Monkeys frontman Alex Turner made his mother extra proud during the band's headline slot at Britain's Glastonbury festival on Friday (28Jun13) by leading the crowd in a mass singalong of Happy Birthday.

The rockers were closing the first official day of the iconic event with a 90-minute set on the main stage, and Turner stopped the performance midway to enlist fans' help in sending a message to his mum, Penny.

He told revellers, "While I've got you, it's actually my mum's birthday today and she is in the crowd," before leading them in a rendition of Happy Birthday and adding afterwards, "Thank you very much - I appreciate that."

The band also channelled several rock icons during the set - Turner jokingly sang snippets of David Bowie's Soul Love and Coldplay hit Yellow before breaking into Arctic Monkeys song Cornerstone, and at the end of their track Mardy Bum he recited a line from Oasis' Don't Look Back In Anger.

The Rolling Stones are due to headline Glastonbury's main stage on Saturday (29Jun13) and Mumford & Sons will close the three-day event on Sunday night (30Jun13).