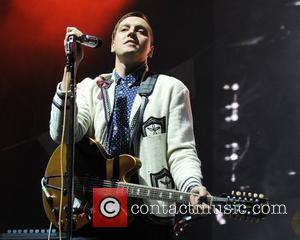 Arcade Fire will be heading back into the studio later this year to begin work on their fourth album, the follow-up to 2010's multi-award winning The Suburbs, reports have stated.
The news was broken on the band's Twitter newsfeed, when they posted: "BREAKING! New Arcade Fire album coming next year, Mercury Records has confirmed."
The new album is slated for a release in early 2013, with the band beginning work on the album off the back of an extensive tour of The Suburbs across the globe and work on the soundtrack for The Hunger Games, for which the band performed the new composition 'Abraham's Daughter'.
The band, whose first album Funeral is regularly cited by critics as one of last decade's best, have a tough act to also follow up the success of their widely-received third album too. The Suburbs debuted at No. 1 on both the UK Albums Chart and the U.S. Billboard chart, as well as numerous other charts across the globe (including their native Canada). It went on to win Album of the Year at the 2011 Grammy Awards and Best International Album at the 2011 BRIT Awards. No pressure on Win Butler and co then.