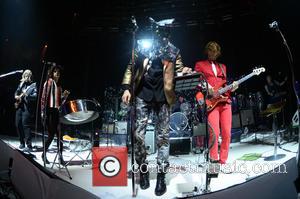 Arcade Fire fans must follow a strict dress code when they attend any shows on the band's upcoming U.S. arena tour.

Fans were asked to wear fancy dress to the string of intimate shows the band played in support of its latest album Reflektor, but the Canadian rockers have now decided to extend the rule to their big-venue North American tour, which kicks off in March (14).

An instruction on the Ticketmaster.com web page for the shows states, "Please wear formal attire or costume."

Addressing the crowd at the band's concert at The Roundhouse, London, earlier this month (Nov13) frontman Win Butler said, "To anyone who felt uncomfortable dressing up - I'm not sorry. At least 70 per cent of you are getting laid tonight... As long as you showered. That's the secret. Boys."