Apparatjik - Square Peg in a Round Hole Album Review

Review of Square Peg in a Round Hole Album by Apparatjik

For years the music industry has seen an array of 'super-bands', an amalgamation of artists from different groups infiltrating the market with various successes. Whether they sell records or not, they always seem to garner a decent amount of publicity, yet one of the best super-groups to appear in the last few years still seem to be awaiting the recognition they most certainly deserve. 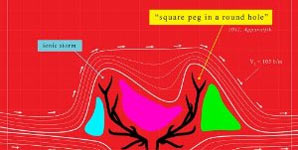 Apparatjik are formed of Guy Berryman (Coldplay), Jonas Bjerre (Mew), Magne Furuholmen (A-Ha) and Martin Terefe (producer extraordinaire), and their latest release, 'Square Peg in a Round Hole', is their second offering in as many years. Their debut album, 'We Are Here', saw them develop and experiment with a hypnotising mix of pulsating and swelling electronica beats which was primarily accompanied by Bjerre's distinctively intangible vocals. This sophomore record sees them impressively progress the electronic essence of their style, and the vocals now featured include those of other band members as well as guest artists.

Opening track, 'Timepiece', has a very 80s feel to it with its throbbing synth reminiscent of the spirit of their first record; it's the ideal song to introduce any listeners new to the band to their sound and appease any existing fans. 'Cervux Sequential' is one of the stand-out tracks; its repetitive pop-driven bridge and chorus positively spell-binding. The gritty and grinding final section sees the beats enthrallingly ramped up and thumping, leaving you wishing it continued for longer. Guest vocalist, Lisa A's tones add a pleasing element of variety, particularly in contrast to Berryman's deeper vocals, but are somewhat let down by her section of lyrics. 'The circuit has a switch/it's hard to be a witch/I think I'm going to start a little fire' make little sense alone or with the remainder of the lyrics which, in turn, slightly discredits the track as a whole.

'Do It Myself' is a fun-spirited song which sees the quartet collaborate with Pharrell and surprisingly veers away from their electric roots to instead feature an R'n'B/hip-hop resonance; a genre the band haven't dabbled in previously. However, with the catchy rhythms and repetitive melodies it certainly works in their favour. 'Blastrocket' sees them return to their more familiar style and 'Pakt' demonstrates them pushing their comfort zone in their field further with edgier riffs and a less stereotypically appealing use of the electronica beats.

Apparatjik are known to their fans for going about their business in a far-from-orthodox manner. They seldom conduct interviews, they perform on stage in a box masked from view, and their apparent fascination with the futuristic spans throughout their website and promotional material as well as the music itself. It is, perhaps, this less conventional approach that has hindered their music being appreciated on a greater scale which is a shame as their work is both hugely enjoyable and meritorious in terms of experimentation. However, this outsider indifference merely makes the reward for those who take the time to embrace Apparatjik's music even sweeter.

Apparatjik - Square Peg in a Round Hole