Confession time first; in the process of selecting what to review from the long list provided by the super hard working staff of the Contact Music back office, I'd confused Apparat (German techno producer, native of Berlin, former supremo of Shitkatapult records) with Apparat Organ Quartet. Me? I blame bad list formatting. Anyway, it's done now. 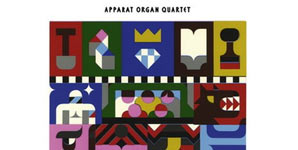 This could've been a potentially catastrophic oversight had the Icelanders actually spent their time playing just the organ - who wants to hear Poker Face done on a Casio, right - but the reality, luckily for you and me, is far more intriguing. Part of a collective that includes amongst others MÃºm, Trabant and you've guessed it Sigur RÃ³s, the fact that they're not actually a quartet either also ends up being insignificant, such is the nature of the profoundly weird-but-wonderful concoction that they call music.

Their second album in what has clearly been a busy nine years, Polyfonia was launched in their own country in 2010, and now gains a release in the UK on the superbly named Crunchy Frog label. According to the band it represents their equivalent of a "Pop" album, a conclusion they reach via a manifesto which describes it as "More accessible and more suited to the musical tastes of the masses". Bully for us.

No, I really mean bully for us, as AOG are quite happy noodling around with the kind of vintage and cast off equipment that was the bedrock of the early synth pop era (And most of which are now actually incredibly expensive and hoarded like ancient bird's eggs by the owners). Anyone therefore who has any familiarity with the likes of Kraftwerk, Neu! or Tangerine Dream will be in their element; as if to underline the fascination, Polyfonia had the working title of Fanfare For The Common Man, French "New Age" composer Jean Michel Jarre's definitive contribution to twentieth century lift music.

If none of that sounds very attractive in the new century, perhaps a bit Old Grey Whistle test, we can reveal that the key to nostalgia remains no taking yourself too seriously. Equally it shouldn't be forgotten however that the influence of these early pioneers can still be felt in almost every aspect of electronic music, as Macht Parat Den Apparat here neatly illustrates, blending vocoded swatches of the aforementioned Kraftwerk with rolling, Moroder-esque disco beats to create something Daft Punk, or even Justice, would be proud to put their shades to.

Like sonic archaeology, it's a way of working that creates music that's familiar but doesn't feel necessarily old. Opener Babbage twinkles with all the pep of a lost them tune to Blockbusters, whilst Cargo Frakt adds some midsection grunt that points everything in the direction marked "LCD Soundsystem". You can have too much of a retro thing of course, and by 1,2,3 Forever the voice effects box has become like a long lost auntie that won't shut up. This follows Sirius Alfa, an opus that starts with all the menacing post-punk dystopia of early Cabaret Voltaire but then winds up sounding like Rick Wakeman with a mild hangover.

Anyone who fails to spot the warmth that the Icelanders have towards their subject matter will probably not be consoled by the band's predicted gestation period for their next project, a dazzlingly express five years. The reason for this they claim is not that they feel it's commercially imperative to follow up such a potentially breakthrough work quickly, but simply that they've now catalogued their equipment properly. It seems that now only that the loss of this spreadsheet - or an ash cloud - can stop their march to...well, wherever we'll be by 2016.