Review of 2010 Album by Apache Beat

It's been 4 years in the making but Apache Beat have finally released their debut album (which was originally scheduled to come out in March). In 4 years, the band have only released 4 singles, so that's 8 songs, and most of these tracks have made it onto the album. That's not the most productive of outputs, in comparison The Killers managed to put out 4 albums in 4 years! 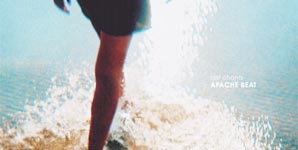 Last Chants is an interesting concept and Apache Beat asked some of their well known musical friends to contribute to some of the recordings, these include Brian Chase (of the Yeah, Yeah, Yeahs), The Rapture, and Lightspeed Champion but at times it appears Apache Beat are more style over substance. The first single they released was Tropics and it isn't a brilliant track it lacks a proper structure, there's no real definition to the chorus or verse. On the new album, Tropics appears in the middle, they say they've put it there because they wrote an intro for it, if this is the case, it's listed as a completely different song called 'A Break in the Light', a piece which is nearly as long as the song it's introducing and seems like much of a wasted exercise.

Lead singer Ilirjana Alushaj (A New York style icon) says the big song on the album will be 'Nightwaters' and I agree with her. It's one of their slower songs and llirjana describes it as 'the calm after the 'Tropic'-al storm', it's calm yet evokes a feeling of excitement. Starting off with a repetitive guitar line it soon has you hooked, and by the time you reach the chorus you're ready to hear more of Ilirjana's lustrous vocals. Nightwaters shows Apache Beat know how to formulate a conventional pop song.

Despite having taken such a long time to produce their first album, many of the tracks on 'Last Chants' sound very rushed, many of the finishing touches that would really help create a flow to this album are missing and some tracks - Let it Go and A Break In The Light - should be scrapped entirely.

Last Chants is an album of two halves, the first 5 tracks being the most disappointing, it's only when you reach Your Powers Are Magic that things start to pick up. Apache Beat have lots of potential but they need to refine their style and song writing. If they do that their next record should be a great listen.