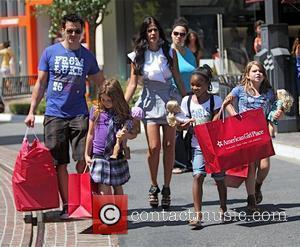 Antonio Sabato Jr, the American actor and Calvin Klein model, has welcomed his first child with wife Cheryl Moana Marie and named the boy after himself, reports People Magazine. Antonio Sabato Jr, best known for his role on the long-running soap opera 'General Hospital', opted for a more unconventional choice for the baby's middle name.
The pair welcomed the baby boy over the weekend and named the child, "Antonio Kamakanaalohamaikalani Harvey Sabato Iii". The middle name has been revealed to be a Hawaiian, meaning, "a beloved gift from the heavens". A representative for the happy couple said, "Antonio and Cheryl are both well and couldn't be happier about the new addition to their family". Antonio Iii is the actor's first child with Cheryl but his third overall. The actor has a 16-year-old son named Jack with the actress Virigina Madsen and a 7-year-old daughter named Mina with Kristin Rossetti. He was also married to the model and actress Alicia Tully Jensen between 1992 and 1993 but the couple had no children together.
Antonio Sabato Jr recently completed filming on the upcoming comedy movie 'Balls to the Wall', about an engaged man who is forced by his future father-in-law to take a job moonlighting as an exotic dancer. The film also stars Mimi Rogers and JENNA DEWAN.