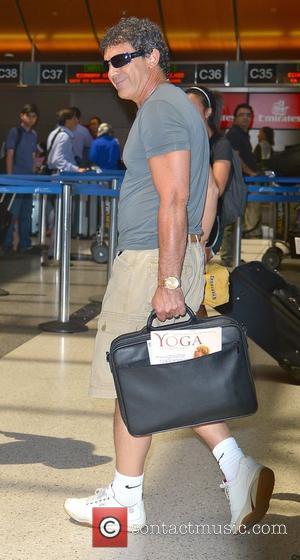 Antonio Banderas is fighting to save his marriage to his wife Melanie Griffith after allegedly being snapped kissing another woman. A report by Women's Day magazine claims the Hollywood actor, 51, got close to a blonde partygoer at the Congo Bongo nightclub.
One eyewitness said, "They kissed more than once.At 2am, Antonio and his beautiful blonde left together." Another source added, "There was so much chemistry that I wouldn't like to say what might've happened next. He was acting like a single man. His wife would be heartbroken if she had seen him that night". The magazine claims Melanie, 54, was at home in Los Angeles looking after their daughter Stella at the time. The actress is yet to comment on the story, though did perhaps tellingly re-tweet a message from a blogger that read, "Guys need to learn magic. Enter her heart without undressing or touching her".
Banderas married Griffith in a private, low-key ceremony in London back in 1996. They had met a year earlier while shooting 'Two Much', though were both married to other people at the time. Their daughter Stella worked with both stars in the 1999 movie 'Crazy in Alabama', in which Griffith starred and which Banderas directed. Women's Day magazine has also posted pictures of the alleged tryst between Banderas and the mystery woman.