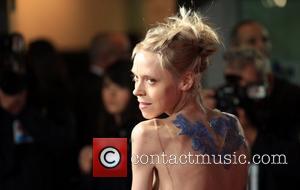 Actress Antonia Campbell-Hughes has been warned she is risking her health after shedding a shocking amount of weight to play Austrian kidnap victim Natascha Kampusch.

The Northern Irish star signed up for the harrowing role in new movie 3096 and insisted she intended to "suffer" as much as Kampusch, who was snatched at the age of 10 and held captive in a dingy cellar for eight years.

Campbell-Hughes has since gone on a dramatic diet and she drew gasps from stunned onlookers at a movie premiere in London this week (beg08Oct12) when she unveiled her skeletal frame.

A medical expert has now warned the actress she could suffer dangerous health issues as a result of her preparation for the role.

Dr. Julian Spinks tells Britain's Daily Star newspaper, "I understand people want to suffer for their art, but if you go too far you face the same risks as someone who is anorexic. You can lose muscle, particularly in the heart, so you're more prone to heart problems. And you can lose bone mass, which causes osteoporosis. You've also got mental health issues that go with it."