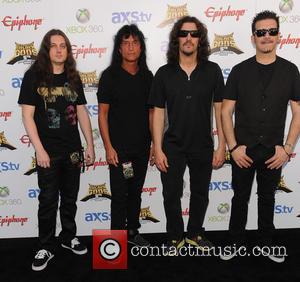 The guitarist feels strongly about the dangers of Internet piracy and another of his main concerns is seeing footage of his gigs pop up online.

Ian tells Examiner.com, "I think it's idiotic. I think the fact that someone would come to a show, spend the money to come to the show, and stand there holding their freakin' phone over their head for 90 minutes is pathetic. It completely defeats the purpose of coming to a live show. I think it's a joke. I've seen (Iron Maiden's) Bruce DICkinson go off on audience members for doing that...

"I think it's idiotic and I don't understand that mindset at all. You're standing at a live show and you're watching it through a screen on your phone."

The rocker is currently touring North America with his spoken word shows, during which he tells anecdotes about his life and career, and he is determined to keep all fan-filmed footage of his gigs off the Internet.

He adds, "I take it (videos) down when people decide that they're going to put my content on YouTube for free. Call me crazy, but I'm one of those crazy artists that thinks you shouldn't give your content away for free. I know that's a crazy way to think these days but I come from the old school. Where you used to buy albums and videos. And I still do, I still buy my music and Dvds. So I feel like if I have enough respect to do that, then everyone should have enough respect to do that."