Anthrax Drummer Charlie Benante Is Aiming To Rejoin His Bandmates Onstage When Their European Tour Touches Down In The U.k. After Struggling With Carpal Tunnel Syndrome. 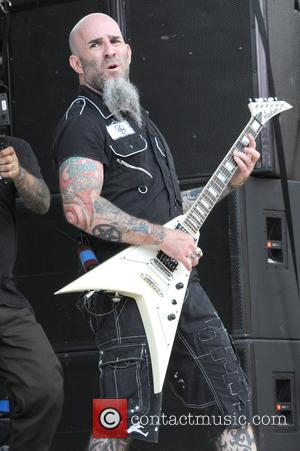 The rocker has been forced to sit out a number of gigs since 2013 as a result of the nerve issue, with Jon Dette stepping in as his replacement.

Dette sat in for Benante at the start of Anthrax's North American trek earlier this year (Apr15) so he could undergo physical therapy, and the former Slayer and Testament star was called upon again to help the group kick off its European leg in the Netherlands last week (25Oct15).

However, Benante plans to be back in action by 21 November (15) and he has offered fans an update on his condition in a lengthy message online.

He writes, "Most of you know I had to have hand surgery a couple of years ago for the carpal tunnel syndrome that I developed. Since then, I've continued to have regular physical therapy and doctor's office visits, and while my hand has gotten a lot better, it just hasn't fully healed.

"My doctor says it could continue to get better, but that's going to take as much time as it takes...

"I love being on the road, playing our music live for you guys, and I'm very excited about playing our new songs for you in 2016, but, at least at this point, for those four, five, six or seven week tours, I just won't be able to be on all dates.

"ANTHRAX has just started a European tour with SLAYER, and Jon Dette is sitting in for me for the first three weeks or so; I'm planning to join the band on November 21 in the UK and will be on the remainder of the tour."

Benante reveals he has been using his time in recovery to "stay actively involved in the band's artwork", while also helping to put together special reissues, like the upcoming Spreading The Disease re-release.

"So, that's the situation," he concludes. "I wanted to make sure that all of you knew exactly what was going on and that I thank you all for the understanding and support. I sincerely look forward to seeing you on the road!"