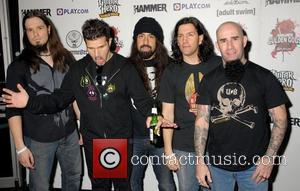 The stars of heavy metal band Anthrax have dedicated a new song to rock rivals Judas Priest to mark the group's imminent retirement from live music.
Judas Priest will bow out of touring after the completion of their 2011 dates, which are due to kick off in Tilburg, Holland in June (11).
Anthrax drummer Charlie Benante has now revealed his band has written a song in honour of the British rockers for new album Worship Music.
He tells Rolling Stone magazine, "There's a song called Judas Priest - it may change, but we like that title, because Judas Priest has called it quits, and it's going to be the last hurrah for them. We wanted to dedicate that song to them."