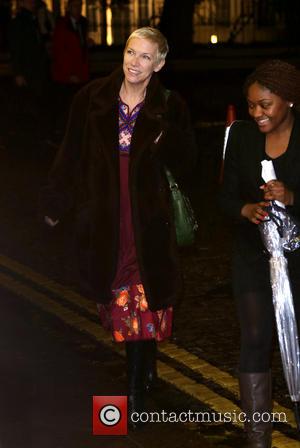 Annie Lennox took to the stage for a special performance at a memorial concert in honour of Nelson Mandela in Cape Town, South Africa on Wednesday (11Dec13).

The former Eurythmics star was a last-minute addition to the line-up for the Nelson Mandela: A Life Celebrated event at The Cape Town Stadium, and she performed a spoken word piece with a bongo drum.

During her time on stage, Lennox praised Mandela for his charity work and urged the audience to back the ongoing fight against Aids, chanting, "Protect yourself, safe sex!... Where's Madiba (Mandela)? He's with us!"

Lennox, who was in South Africa for an Aids conference at the time of Mandela's death on 5 December (13), was previously involved with his 46664 campaign, which he used to raise awareness of the disease through high-profile concerts.

Pienaar was played by Matt Damon in 2009 film Invictus, which focused on Mandela and the political changes in the country in the aftermath of apartheid as the nation hosted the 1995 Rugby World Cup.

Civil rights icon and former South African leader Mandela died on 5 December (13) at the age of 95.