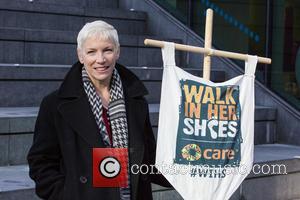 Picture: Annie Lennox - CARE International UK marked the International Women's Day with 'Walk In Her Shoes' London march attended by the next generation of suffragettes...

The British stars took part in the Walk In Her Shoes march in London to coincide with the global event to promote gender equality, and they were joined by Helen Pankhurst, the great-granddaughter of pioneering women's rights activist Emmeline, and her daughter Laura.

Around 600 feminists, some dressed like Pankhurst's suffragettes, carried banners and placards calling for equal rights, and during a speech to the crowd, Lennox declared, "You're potential change-makers. You have so many more rights than so many women."

Faith later spoke to the protesters after the march concluded outside London's Royal Festival Hall, saying, "It goes to show how important it is that women stand together and fight for each others' rights. Any one of the women here could be any one of the women in a far-off land suffering from injustice."

The Walk In Her Shoes charity walk initiative, created by CARE International, encourages participants to walk 10,000 steps a day for a week to show support for women in developing countries who have to walk miles for water.

Emmeline Pankhurst was a key figure in the women's suffrage movement in Britain in the early 20th century and led the suffragettes as they battled to give women the right to vote.