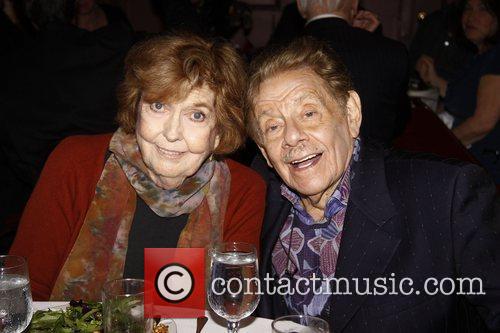 "Anne's memory lives on in the hearts of daughter Amy, son Ben, her grandchildren, her extended family and friends, and the millions she entertained as an actress, writer and comedienne.” Meara’s cause of death has not yet been made public.

Meara and Stiller were married in 1957 and performed regularly together as comedy due Stiller & Meara on ‘The Ed Sullivan Show’. The couple’s routines often focused on their different backgrounds, with Stiller being raised Jewish and Meara coming from an Irish Catholic family.

In 1975 Meara starred in her own show on CBS 'Kate McShane', which gave her an Emmy award nomination, but the series was cancelled after only 10 episodes. Meara was also an accomplished dramatic actress, receiving a Tony nomination in 1993 for ‘Anna Christie’.

Meara’s career continued into the 90s when she was also a recurring cast member on daytime soap ‘All My Children’, playing Peggy Moody. In 1997 she received her fourth Emmy nomination for two part drama, ‘Homicide: Life on the Street’. She also starred in ‘Sex and the City’, playing the role of Steve Brady’s mother Mary.

In 2007 Meara and her husband were given a joint star on the Hollywood Walk Of Fame, the pair often appeared together in their son Ben’s movies including Zoolander and Night at the Museum. Meara’s last film credit was as the voice of Winnie in Disney’s Planes: Fire & Rescue, which also starred Jerry Stiller.