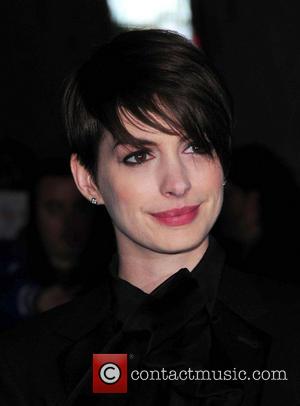 Anne Hathaway might have won the Critics’ Choice Award for Best Supporting Actress last night (January 10), but she wasn’t in much of a mood to be thankful them for it, after they spelt her name wrong.

"This is a bittersweet moment for me because I have this award, but you spelled my name wrong," she announced, according to Us Magazine. It turned out that in the video package precluding the award’s ceremony – with her Les Miserables co-star Eddie Redmayne presenting her - Hathaway's first name was misspelled as ‘Ann’. "It is with an 'e'," she said tersely. "It's probably in bad taste for me to point that out here."

She softened as she continued her speech though, thanking the rest of the Les Miserables cast and crew as well as her “new husband” Adam Shulman. Hathaway has much bigger things on the horizon, possibly starting this weekend where she is up for Best Supporting Actress at the Golden Globes. She’ll hoping her awards season will then be ending with a bang next month after being nominated for a Best Supporting Actress statuette at the Oscars."I started crying and I started laughing, and then doing both at the same time," she told the New York Daily News of learning of the nomination. "And then the calls and the texts starting coming in."