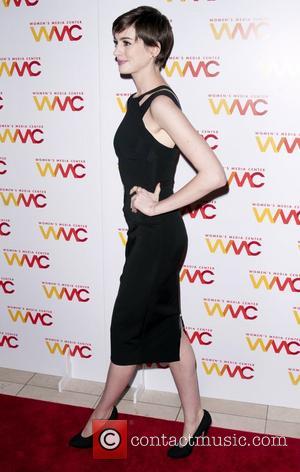 Anne Hathaway and her fellow cast members in Les Miserables were forced to sing live, MTV News have reported. They spoke to the movie’s director, Tom Hooper, who explained that it was of the utmost importance to have the actors singing live, to make the performances believable. The cast agreed, so Hathaway, Russell Crowe and Hugh Jackman all had to put their vocal talents on display if they wanted to be part of the film.

“The whole sense that the character is producing the song, rather than the character is following a song, completely changes the medium of the music,” Hooper told MTV. “It's amazing how much more visceral and how much more real it is. I, for one, find lip-syncing; it's always made me find it fake. Even the great musicals, I have to kind of forgive them for miming. It's a real step forward in the form, which we are all really excited to be involved in.” Hathaway reportedly spent four months with a vocal coach before joining the rest of the coach for the nine-week filming schedule and it looks as though her hard work paid off.

The movie version of Les Miserables premiered at New York’s Lincoln Center. The Hollywood Reporter say that although Anne Hathaway’s performance as Fantine is a brief one, she makes an “indelible impression” and already, mutterings of potential Oscar nominations have begun to surface.