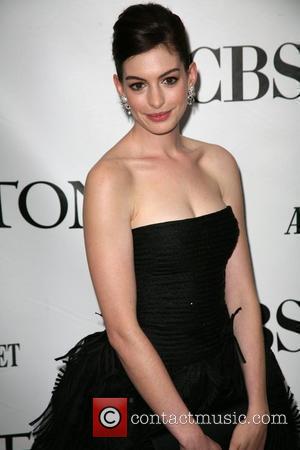 Oscar nominee Anne Hathaway has won high praise for her stint in a free New York production of William Shakespeare play TWELFTH NIGHT, with critics hailing the performance as "most wonderful" and "joyous".
The Devil Wears Prada actress makes her Shakespeare debut alongside Audra MCDonald, Julie White and Raul Esparza in the Public Theater play in Central Park, appearing in the gender-bending role of Viola, a girl who disguises herself as a man called Cesario.
Twelfth Night officially opened at the Delacorte Theater on Thursday (25Jun09) after a week of previews, and Hathaway's performance has been noted as one of the highlights of the romantic comedy.
Industry paper Daily Variety describes her stage outing as a "thoroughly winning and accomplished professional Shakespeare debut", while the New York Daily News notes Hathaway brings "sweet charm and deep poignancy" to the part, and the New York Post calls it a "solid, committed performance".
But it's not just Hollywood star Hathaway who's garnering compliments for her role - the entire cast and crew's efforts have been recognised by the Daily News as "one that's not overly stylised, petrified or simply memorised", calling the play "sublime" and quoting a line from the show, branding it "most wonderful".
Twelfth Night runs until 12 July (09).
Hathaway has previously starred in a New York theatre production of Carnival!, back in 2002, for which she received positive reviews.