Can Anne Hathaway Outdo Elizabeth Taylor In 'The Taming Of The Shrew'? 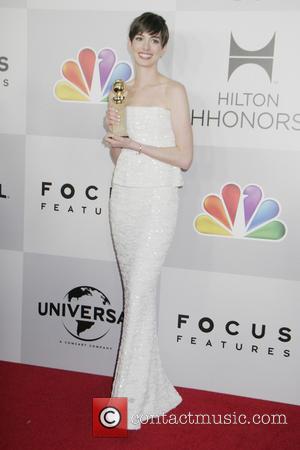 Anne Hathaway is likely to pick up the Best Supporting Actress prize at the Oscars in February, though it's likely she'll be competing for Best Actress upon the release of writer Abi Morgan's adaptation of The Taming of the Shrew. The latest movie - based on Shakespeare's late 16th century comedy - was announced this week, though a director is yet to be attached, reports The Wrap.

The Taming of the Shrew has been adapted dozens of times by Hollywood, though most notably in 1967, with Elizabeth Taylor and Richard Burton in the lead roles. The teen-movie 10 Things I Hate About You, starring the late Heath Ledger and actress Julia Stiles, was also based on Shakespeare's play. Morgan - the screenwriter behind The Iron Lady and the critically acclaimed Shame - will transfer the action to the modern day, though the movie will be set in Italy. The main plot depicts the courtship of Petruchio, a gentleman of Verona and Katherina, the headstrong shrew. She is an unwilling partipant to the relationship, though is "tamed" until she becomes a compliant and obedient bride.

The project is being developed by Universal and British production company Working Title - the firm behind Tinker, Tailor, Soldier, Spy, Atonement and Les Miserables. It all sounds very Oscar-rish, and exactly the sort of project we'd expect Hathaway to begin working on.

Watch Anne Hathaway Arriving At The David Letterman Show In A Stunning Dress: