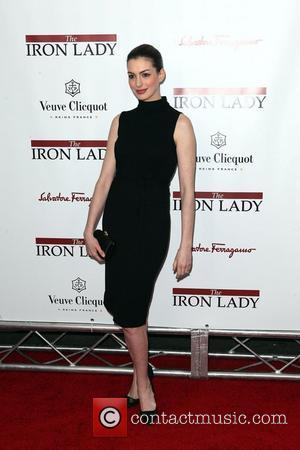 New Catwoman Anne Hathaway based her performance in the latest Batman movie on Hedy Lamarr, the glamorous 1940s film star who first inspired the character.
The Devil Wears Prada star is the latest actress to take on the role of the Caped Crusader's feline nemesis, following in the footsteps of Julie Newmar, Eartha Kitt and Michelle Pfeiffer, in Christopher Nolan's upcoming The Dark Knight Rises.
Hathaway has now revealed she went back to the character's roots for her portrayal, basing her performance on late Hollywood legend Lamarr, who was cited as the inspiration for Catwoman by comic book artist Bob Kane.
She tells the Los Angeles Times, "I know this sounds odd, but her breathing is extraordinary. She takes these long, deep, languid breaths and exhales slowly. There's a shot of her in (1933 film) Ecstasy exhaling a cigarette and I took probably five breaths during her one exhale. So I started working on my breathing a lot."
Hathaway also admits she isn't fazed by stepping into such a famous role as each actress to have played Catwoman gave the character their own unique stamp.
She adds, "What's come before doesn't limit or even affect this new version. It doesn't affect me because each Catwoman - and this is true in the comics as well - she is defined by the context of the Gotham City created around her... Michelle Pfeiffer's Catwoman was informed by Tim Burton's Gotham and Eartha Kitt was informed by Adam West's Gotham. You have to live in whatever the reality of the world is and whatever Gotham is."