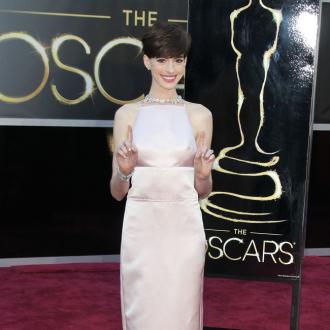 The 'Les Miserables' actress immediately kissed her husband Adam Shulman and jumped up to embrace her co-star Hugh Jackman upon scooping the prestigious prize for her role as prostitute Fantine in the big screen adaptation of the popular musical.

Accepting the trophy from last year's Best Actor winner Christopher Plummer, she said: ''It came true. Thank you so much for the Academy for this.''

The 30-year-old star, who cut off her long hair and lost 25 pounds in three weeks for the role, was awarded the accolade ahead of fellow nominees Amy Adams for her performance in 'The Master', Sally Field for her role in 'Lincoln', 'The Sessions' star Helen Hunt and 'Silver Linings Playbook' actress Jacki Weaver.

She paid tribute to them, saying: ''I look up to you all so much and it's been such an honour.''

After thanking her co-star Hugh, cast and crew, she paid special tribute to her husband of five months, saying: ''By far and away the greatest moment of my life was when you walked into it.''

Anne, who won in the same category at the BAFTAs, Golden Globes and Screen Actor's Guild Awards, also performed songs from the musical live alongside the rest of the cast at the ceremony, which celebrated the theme of music in film and also featured performances from Catherine Zeta-Jones, Jennifer Hudson, Dame Shirley Bassey and Adele, as well as a number of other famous faces.

Earlier in the night, Anne admitted that winning the award would be a ''wonderful, surreal twist'' because her mother once played the role of Fantine onstage.

She told MTV News on the red carpet: ''It's just out of this wonderful, surreal twist. I'm not one that usually feels that things are destined, but I do feel that a little bit.''