Anne Hathaway and her husband Adam Shulman celebrated her Oscar nomination by screaming and crying. 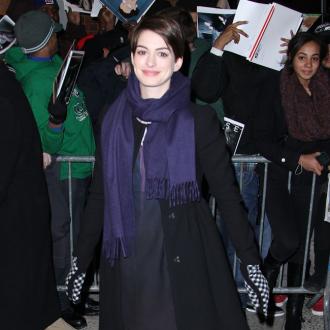 Anne Hathaway cried and her husband screamed when they discovered she was nominated for an Oscar.

The 30-year-old actress received a Best Supporting Actress nomination for playing Fantine in 'Les Miserables' and she and Adam Shulman couldn't contain their joy when they heard the news.

She told E! News: ''I was just in bed and I was watching TV and they said my name.

''He was screaming louder than me! I think we might have scared the dog.

''I cried a lot and he hugged me and we kissed. It was really sweet.''

Anne - who married Adam in September after fours years of dating - previously claimed she knew that if their first date went well, she would marry him.

She said: ''I'm married to a nice guy, he's a producer. We met through friends.

''It was pretty instant, as soon as I met him I was like what is the deal with that guy, but someone told me had a girlfriend so I backed off. Then six weeks later I found out that he didn't have a girlfriend so I asked him to come to New Orleans with me. I had a spare ticket.