Anne Hathaway Proves Her Comic Worth In SNL Appearance 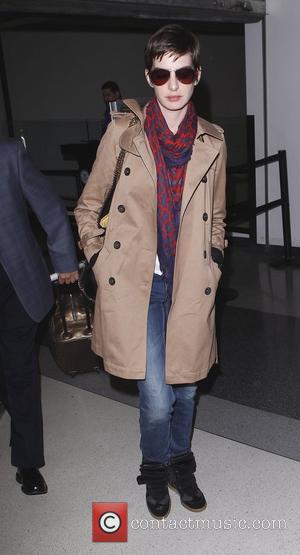 Anne Hathaway starred as this weeks guest host of Saturday Night Live last night (Nov 10), proving herself to be a master of comic timing and delivery. Don't act like you weren't surprised.

The Dark Knight Rises star threw herself into every role she took on during the show, which also featured musical guest Rihanna, lampooning a few celebs on the way.

Her parody of Carrie Mathison, the neurotic CIA agent with bi-polar disorder from the hit show Homeland, was absolutely spot on. The character, played in real life by Claire Danes, is known for her penchant for going overboard with pinning evidence on cork boards and her tendency to sleep with witnesses, co-workers or whoever is around as well as mixing her medication with white wine - subjects that were thoroughly covered on the laugh-a-minute show.

Danes wasn't the only person in line for the Hathaway axe, as Katie Holmes got off with a more light-hearted jab as she appeared on a fictional version of the Ellen DeGeneres show, with Hathaway portraying the single mother as not being quite there as she as she provided comic answers to each of the questions. One such occasion, when asked how she is she replies: "Well if you read Us Weekly you'll know that Suri and I spend every waking minute at the zoo."

She also got the chance to make fun of herself and her upcoming role in the film adaptation of Les Miserables, leading some of the SNL cast into a comic rendition of the classic Les Mis show tune 'One Day More.' Her other roles on the show also included her as a MacDonalds manager and a blonde teen with her own co-hosted talk show. Finishing the show off with her own take as the woman from Grant Wood's 'America Gothic,' who rather than staying perfectly still like the painting depicts, wont stop moving and making silly faces. Hathaway said a fond farewell to the show as she introduced the nights musical guests, but not without thanking Danes and Holmes first, something tells us that Hathaway might be back on SNL in the future.