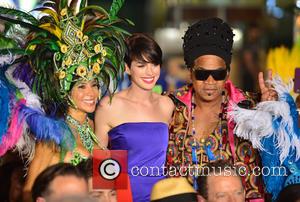 The Les Miserables star has been working on a film about the late screen legend since 2009, but the project has suffered numerous delays over the last few years.

Work on the project, based on biographer Gerald Clarke's 2001 book Get Happy: The Life of Judy Garland, was due to begin in 2012 but never materialised, prompting rumours the project had been cancelled.

However, Hathaway has now spoken out to insist she is still working on the film, but the process is taking a long time.

She tells U.K. morning Tv show Lorraine, "I've actually been trying to get a Judy Garland biopic off the ground for about five years now and it's slow going. I'm very much at the baby stage of learning how to have an idea, put it together, put it together with the right people, find the right screenwriter, get the right draft and take it to the right filmmaker. It's a learning process. I'm hoping it happens. I have a nice idea for it. Fingers crossed for that one."

Hathaway plans to play The Wizard of Oz star in the film. Garland died in 1969, aged 47.