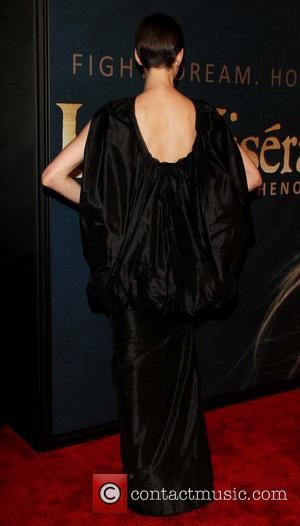 Actress Anne Hathaway gave fans and photographers an eyeful on Monday (10Dec12) after accidentally flashing her genitals as she arrived at the New York premiere of Les Miserables.

The newlywed was climbing out of her chauffeured car outside Manhattan's Ziegfeld Theatre when the slit in her gothic black dress revealed she had chosen to attend the screening without underwear.

However, Hathaway appeared to be completely unaware of her wardrobe malfunction and proceeded to walk the red carpet and pose for photos with her co-stars Hugh Jackman, Russell Crowe and Amanda Seyfried.

Hathaway isn't the only female celebrity to have suffered such an embarrassment over the years - Britney Spears famously flashed photographers as she was getting out of a car in 2006 and both Paris Hilton and Lindsay Lohan have been caught out by the long lens of the paparazzi.