Anne Hathaway found making 'Les Miserables' ''hard'' so used to visit her pregnant friend to cheer herself up. 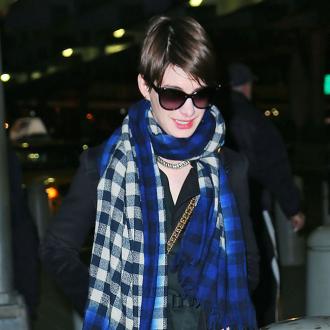 Anne Hathaway would ''stare'' at her friend's baby bump to make her feel better during 'Les Miserables' filming.

The 30-year-old actress shed 25 pounds for the role of prostitute Fatine in the musical movie and found herself wanting to see her pregnant friend to cheer her up during the ''hard'' process of being away from her husband Adam Shulman and being on a diet.

She revealed: ''Making the film was so hard. I was hungry and I couldn't see my husband. One of my old school friends, who now lives in London, was pregnant, so I would go see her when I had time off and just stare at her bump to make me happy again.

''We use to sing backstage all of the time. It took my mind off being hungry.''

Although Anne put herself through hardship for the film she found herself ''weeping'' when watching the final piece - praising her co-stars Hugh Jackman and Eddie Redmayne's singing voices.

She added to heat magazine: ''I watched it and I absolutely wept. The first time I started to cry was during Hugh Jackman's first song. He hits this big note, the camera pans up and the music kicks in and I wept buckets.

''My make-up was everywhere. Amazing. There was this moment where I was like, 'Wait, is Eddie [Redmayne] singing? It's just so beautiful.''