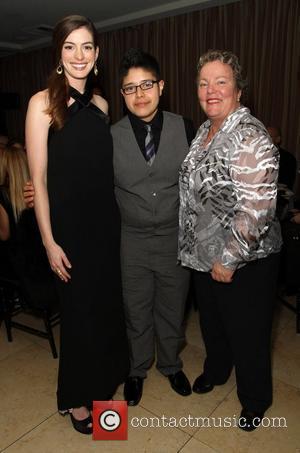 In an interview with Allure magazine, Anne Hathaway has revealed that her biggest challenge, whilst filming the role of Catwoman for Dark Knight Rises, was grappling with her costume. The actress describes the skin-tight one-piece as being "a psychological terrorist" and explained that the work she had to do just to fit into it nearly pushed her over the edge.

"The suit, thoughts of my suit, changing my life so I would fit into that suit. It dominated my year," Hathaway explained. It wasn't just her Catwoman outfit that put her under pressure to lose weight this last year, though; she also had to undergo some "crazy weight stuff" for playing Fantine in the screen adaptation of Les Miserables, too. "I'm on day six of detox ... this diet makes me break out, so I love that. Nothing like living on hummus and radishes and then be all, 'and I got a pimple. Yeah!'" Anne's not the only one that had problems with their costume on the set of Christopher Nolan's third Batman movie though. Christian Bale also struggled breathing when he donned his Batman outfit. Whether or not that's the excuse for his distinctive raspy voice in the movie is still unclear though.

A new trailer has emerged online this week for 'The Dark Knight Rises', as tension builds for the July release of the film. Tom Hardy stars as the villain Bane, who features heavily in the new trailer and can be seen casting Batman's mask to the floor, in one brief scene.