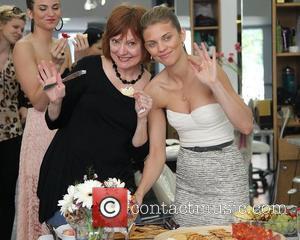 AnnaLynne McCord, Mekhi Phifer and Holly Robinson Peete are among the stars who have jetted out to the Middle East to promote Israel.
Omar Epps, One Tree Hill star Paul Johansson and The Vampire Diaries' Zach Roerig are also enjoying the week-long vacation hosted by America's Voices in Israel, an organisation which invites Hollywood stars out to the Holy Land to bolster its image in the U.S.
Their visit began with a walking tour of Tel Aviv on Monday (07May12), followed by a stop at the Nalaga'at Center, a theatre for actors who are all deaf and blind.
MCCord was especially moved by the talented troupe and took to her Twitter.com page to tell fans, "First day in Israel. Visited Nalaga'at Center Theatre for Actors who are deaf and blind. I was so touched."
Phifer added, "I'm out here in Israel having a blast! Handling business but enjoying the experience! It's beautiful out here... I might even get baptized (sic) in the Dead Sea!!"