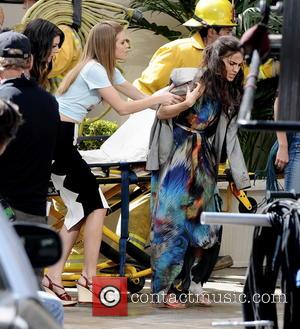 Picture: AnnaLynne McCord and Jessica Lowndes - The cast of '90210' film their last episode near MacArthur Park. The CW announced that the show will be...

Actress AnnaLynne McCord and her 90210 co-stars discovered the U.S. Tv teen drama had been axed via Twitter.com.

Bosses at America's The Cw network announced last week (28Feb13) that the show's current fifth season would be its last, but executives failed to break the news to the young cast - and they only learned they were out of a job from fans online.

MCCord tells Life & Style magazine, "It was a shocker. We found out via Twitter - that wasn't cool at all."

The stars marked the end of the popular programme earlier this month (Mar13) during a special wrap-up party in Los Angeles and MCCord admits bidding farewell to her castmates was "emotional" and "bittersweet".

However, the blonde beauty is trying to remain positive about the end of the updated Beverly Hills, 90210 show: "We've had a great time. All things have to end and new things begin."

MCCord recently expressed fears her character Naomi Clark would not receive a "proper send off" due to the show' sudden axe, so she has taken matters into her own hands and filmed an alternative ending, which she plans to post on YouTube.com when the series finale airs in May (13).

She adds, "They rewrote the ending and I liked the original so I filmed my own ending - a surprise for the fans."