Anna Kendrick has spoken of her ''relief'' at not having to appear in 'Twilight' anymore so that she won't be able to accidentally reveal any information about the films. 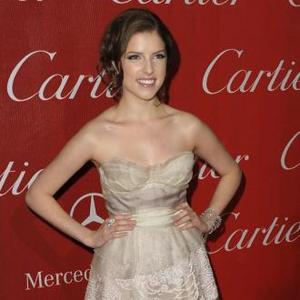 Anna Kendrick has spoken of her ''relief'' at not having to appear in 'Twilight' anymore.

The 26-year-old actress - who plays Jessica Stanley, a friend of Kristen Stewart's character Bella Swan, in the vampire franchise - is glad she no longer has the opportunity to mistakenly reveal any storylines from the films after she previously gave away some information by accident during interviews.

She said: ''It's a relief not to have to transverse into the murky Waters of talking about 'Twilight'.

''I know nothing about the next one, I can't spoil anything and I'm looking forward to watching it.''

Anna stars as Rosie - who becomes pregnant after reuniting with an old flame - in her latest movie 'What To Expect When You're Expecting', and she was blown away by how ''beautiful'' co-star Jennifer Lopez is.

Speaking on 'BBC Breakfast', she added: ''They flew me into Atlanta just for the purpose of walking into the frame of Jennifer's scene.

''She's so beautiful it makes your head want to explode.''

Jennifer - who plays Holly, a woman who adopts a baby from abroad after struggling to conceive -recently admitted the movie has inspired her to consider adopting a child.

The brunette beauty - who has four-year-old twins Max and Emme with estranged husband Marc Anthony - explained: ''It's funny because before the movie I never really thought about adoption, I just always wanted to have my own baby and I was so focused on that and it took me a while to have my own.

''But after the film and during the making of the film when I held those two little Ethiopian twins I fell in love instantly and I can see how somebody can do this, how it is so easy to embrace a child who has nothing.