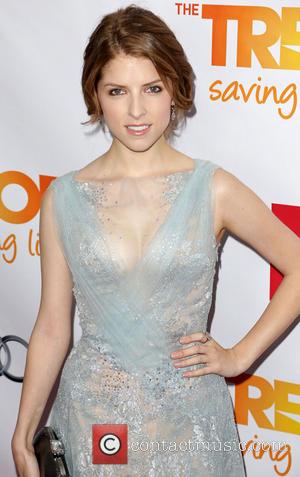 Anna Kendrick's tweet about Hollywood hunk Ryan Gosling went viral this week and shows no signs of slowing up, having been re-tweeted over 7,000 times in less than 24 hours. The racy message has now been shared by Twitter users 20,713 times and has been favourited over 23,000 times.

In case you hadn't heard, the 27-year-old Pitch Perfect actress tweeted, "Ugh-NEVER going to a Ryan Gosling movie in the theatre again. Apparently sitting in the back row and masturbating is still considered 'inappropriate'." The tweet - posted at 10.45am on Monday - lit up the internet and received a slew of replies almost immediately. One user joked, "The hell it is! I do that at Gosling movies and I never get in trouble," while another suggested, "They should put this in the trailers for Gangster Squad to get people to watch. Best testimonial yet." A pretty good idea considering the movie has a dismal score of 34% on Rotten Tomatoes - the New York Times critic A.O Scott said, "Gangster Squad would have been more fun as an animated feature, with fanciful animals in the principal roles." Kendrick - who has over 600,000 followers on the micro-blogging site - has not posted since the tweet in question.

Despite her love for Gosling, she has been in a relationship with the Hot Fuzz director Edgar Wright since 2009.

Check out the trailer for the movie Kendrick had no-doubt paid her money for, Gangster Squad: