Anna Kendrick On 'Into The Woods' Role: I'm An Emotional Accountant

She describes her character as 'unpolished and neurotic and modern'.

There's no question that Anna Kendrick has re-invented the character of Cinderella for fairytale musical 'Into The Woods', and while it has drawn both criticism and praise, she herself is grateful to have had the opportunity. 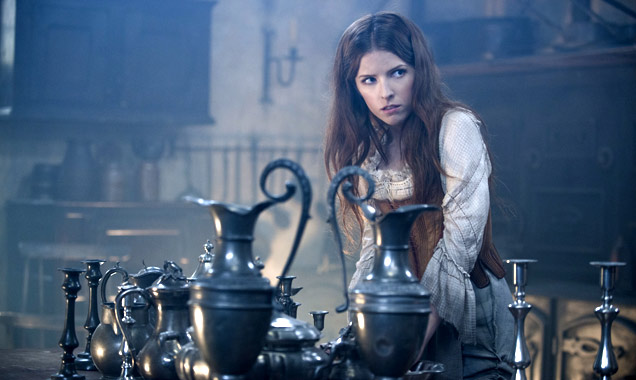 Anna Kendrick is Cinderella in 'Into The Woods'

The purpose of the Rob Marshall directed movie was to put across that there's flaws in everybody, even those childhood characters we so adore. In 'Into The Woods', we see each character drawn in by the magic of the woods with the determination for their wish to come true - despite what the consequences may be. When it comes down to Cinderella, a character known for her unwavering kindness, it could've been difficult to make her real; imperfect and often obsessive.

'I felt really grateful that Rob and Stephen Sondheim gave me permission to be all those things; unpolished and neurotic and modern', says Kendrick. 'But she is vulnerable and she does have heart and she works herself into a frenzy when she's too in her own brain and there are moments when Rob had to remind me, 'It's less head, more heart'.'

There has been no doubt that she has seriously impressed her co-stars and crew members with both her acting skills and extraordinary vocal ability. While outsiders have criticised her for not looking like a conventional Disney princess, she reveals that bringing herself into the character was important to her. 'It was great to have Rob there to centre me during those times because my instinct in my life, and sometimes with Cinderella, was to be weighing things and looking at the data - an emotional accountant of sorts', she admits.

'To be reminded to feel it but to look at the unpolished version and believe that the vulnerability was in there was a really great gift.'