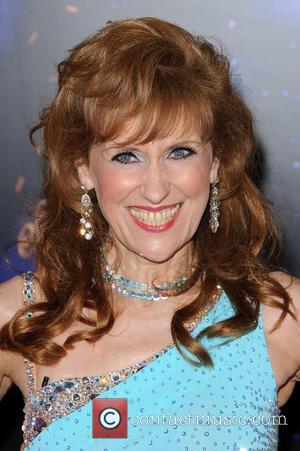 Anita Dobson has riled radio bosses by refusing to be photographed for Bbc Radio 5 Live's website. The former Eastenders star was discussing her stint in Strictly Come Dancing on Rachel Burden's show last Friday (25 November 2011), but declined a request to have her picture take, explaining she did not look her best.
Dobson, 62, politely refused a photo opportunity but the incident has since cascaded into full blown row between Strictly's publicity team and the radio station. Five Live boss Scott Solder was so riled by the incident, he has vowed to ban all publicity for the dancing show and instead focus on Itv rivals such as The X Factor and I'm A Celebrity.Get Me Out Of Here. A source told the Daily Express, "The Strictly team emailed the Radio 5 team saying she should not have been asked for a photo in the first place. Anita is an incredibly sweet lady but she did not feel she was looking her best and did not want her photo taken".
Dobbs, who is married to Queen rocker Brian May, is facing an ordeal on Strictly Come Dancing this week after partner Robin Windsor suffered a foot infection and has been ordered to rest. The actress will now take to the floor with Brendan Cole, who previously helped Holly Valance when her partner Artem Chigvintsev fell ill with a back injury.