Angelina Jolie thinks ''marriage is a lovely thing'' seemingly hinting there is a chance she could tie the knot with partner Brad Pitt in the future. 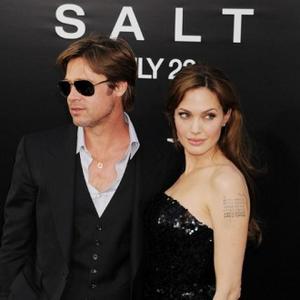 Angelina Jolie has hinted she may marry Brad Pitt in the future.

Although the couple - who have been together since 2005 - haven't seriously considered tying the knot the actress does think being someone's wife is a special thing.

Angelina - who raises six children, Maddox, eight, Zahara, five, Pax, six, Shiloh, four, and two-year-old twins Knox and Vivienne, with Brad - said: "I do think marriage is a lovely thing as I've tried it twice before, but we haven't felt the need to do it yet. We have already made the greatest commitment of having a family together."

The 'Salt' star - who has previously been married to actors Billy Bob Thornton and Jonny Lee Miller - also revealed one of the best things about her relationship with Brad is the fact they push each other to be better people.

She added to new! magazine: "We push each other to be better, even if it's just a better bike rider or better pilot. We 're constantly in competition."

Angelina - who is a qualified pilot - loves flying and enjoys being able to escape her hectic lifestyle when she is in the air.

She said: "There is nothing freer than flying and looking down on the world. It's the only place I am totally alone. I learned to fly in England and have had my pilot's licence for a few years - Brad flies, too."