Angelina Jolie took daughters Zahara and Shiloh to get their ears pierced in London, only for Shiloh to drop out after her elder sister cried from the pain of the piercing gun. 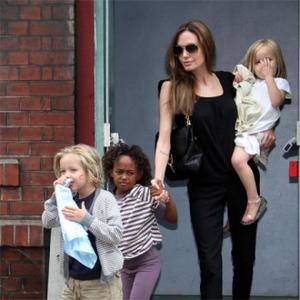 Angelina Jolie took two of her daughters to get their ears pierced.

The 'Salt' actress accompanied Zahara, six, and Shiloh, five - two of her six children with partner Brad Pitt - to a small salon in London to have the beauty treatment, but Shiloh decided against the process at the last minute after her eldest sister cried because of the pain.

A source told The Sun newspaper: "The eldest girl picked out some pretty 18-carat gold studs ad gave them to her mum.

"The piercing gun was a bit too painful for her and she screamed then burst into tears. She was saying it felt like a stapler. So her little sister changed her mind about having hers done ... But they all left with big smiles on their faces. Angelina bought them another little gift to make sure they both felt special."

The couple and their kids are currently in the UK while Brad shoots his movie 'World War Z', and they are reported to be so enamoured with British culture they are looking to buy a house on the outskirts of London.

A source told the Daily Star newspaper: "Brad and Angelina love the place, the food, the area and they think the people are way more polite."

Should the pair - who also have Maddox, 10, Pax, seven, and three-year-old twins Knox and Vivienne - decide to make the move, they should have no trouble making friends, with the family enjoying a play-date with Gwen Stefani's children Kingston, five, and Zuma, three, at the 'Hollaback Girl' singer's north London home on Monday (26.09.11).

While there the children enjoyed some finger painting, before Angelina took her children to Japanese restaurant Wagamamas.