Angelina Jolie has revealed she was inspired to adopt after she went to Cambodia to film scenes for her 2001 movie 'Lara Croft: Tomb Raider'. 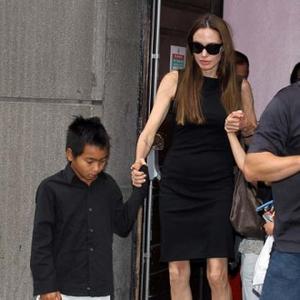 Angelina Jolie was inspired to adopt by her role in 'Lara Croft: Tomb Raider'.

The actress played a daredevil archaeologist - based on the character from the popular 'Tomb Raider' video game series - in the 2001 movie and she has revealed it was the scenes she shot in Cambodia which convinced her to adopt her first child, son Maddox, from the Asian country.

She said: "A turning point in my life came when I made 'Lara Croft: Tomb Raider', in England. It also involved filming, partly, in Cambodia. I learned that the world is bigger than I thought it was and there were more important things than a film. I did not know much about Cambodia. I did not appreciate how beautiful it was and I had never met such open-hearted people."

Angelina - who went on to adopt two more children, son Pax from Vietnam and daughter Zahara from Ethiopia - also credits the film with helping her turn her back on her hard-partying behaviour and live a healthier lifestyle.

She explained: "That film also helped me get in to shape. I smoked a lot, drank far too much, had way too much coffee and suffered from insomnia. The Fitness coaches on 'Lara Croft' adjusted me. I had a certain amount of water, protein checks, vitamins, my cigarettes were taken away and I was not allowed to drink alcohol. As for that role, I was loud and insane. I had too much fire for everyday life, so fitted into Lara Croft's world perfectly."

Although Angelina had to fight robots and dodge booby traps in The Adventure movie, the 36-year-old actress insists being a parent to Maddox, now 10, and his five siblings, Pax, seven, Shiloh, five, Zahara, six, and three-year-old twins Vivienne and Knox, is harder than being a Hollywood hero.

She said: "Once I became a mom, I realised it was far harder than being Lara Croft. I want my kids to appreciate how fortunate they are in life, compared with so many people who have nothing.

"If anybody ever tells me that I am a mother to them like my mom (Marcheline Bertrand) was to me, it will be a great compliment."