Angelina Jolie Was Honoured For Her Career Achievements With A Special Prize At The Wall Street Journal Innovator Awards In New York On Wednesday Night (04nov15). 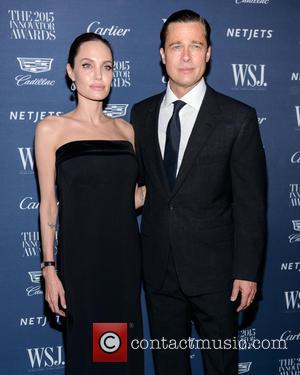 The Hollywood actress was feted with the magazine's 2015 Entertainment/Film Innovator prize, and she attended the ceremony in the Big Apple with her husband Brad Pitt to pick up the trophy.

Angelina was honoured both for her achievements in Hollywood and her humanitarian work, and other guests included her The Good Shepherd director Robert De Niro.

In an interview with the publication to celebrate her award, Angelina opens up about becoming an ambassador for the United Nations' Refugee Agency in 2001, revealing she was worried her Hollywood reputation would have a negative impact on the organisation.

"It was during a time when there was a lot of gossip about me," she says. "I told them I didn't think they realised what they'd be bringing upon the agency, that a lot of people didn't see me the same way they did, and I thought it would be a negative."

However, the agency's high commissioner sympathised with her plight and insisted on offering her the role.

"He said he was sorry," Angelina adds. "It was the most amazing thing. I'd never had sympathy for something like that."

The article also covers her career achievements and her recent cancer prevention surgeries, which included a mastectomy and the removal of her ovaries, and her husband Brad Pitt lavished praise on his wife for her bravery.

"I'll tell you this about her surgeries: Once the decision was made, she was on the operating table two weeks later," he said. "You have to understand that this is a woman who never knew she'd make it to 40.

"This is a woman who had watched her mother, aunt and grandmother become sick and eventually succumb, all at an early age. Her drive, her absolute value in herself, is defined by the impact she can have during her time here - for her kids and for the underprivileged and those suffering injustices."