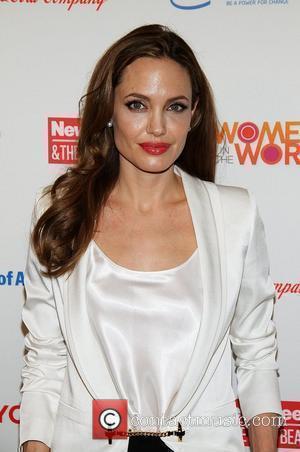 Angelina Jolie teamed up with Britain's Foreign Secretary William Hague in London on Tuesday (29May12) to launch an initiative to combat sexual attacks in conflict areas.
Hague announced plans to set up dedicated teams to investigate rape in troubled countries as part of a new government scheme, and he was joined by Jolie, who works as a special envoy for the United Nations.
The actress' Bosnian war movie In The Land Of Blood And Honey, which features a harrowing rape scene, was shown to Members of Parliament (MPs) in a bid to highlight the problems in war zones.
Jolie spoke about the issues she tackled in the movie, and Hague declared in a statement, "We are deeply honoured that Ms Angelina Jolie, Special Envoy of the UN High Commissioner for Refugees, has joined us... at this launch. Ms Jolie, we are very grateful to you for coming and for graciously allowing us to screen your film In the Land of Blood and Honey. For more than 10 years you have worked to highlight the plight of refugees worldwide in Haiti, Somalia, Sudan, Afghanistan, Syria, Libya and many other countries; to support numerous charitable causes, and to promote education, justice and the rights of women worldwide.
"And in this film you bring to life the devastating human consequences of international inaction in the face of conflict... It is a rallying call that none of us can ignore."
Jolie has visited conflict zones and refugees in countries including Iraq, Sudan and Libya.