Angelina Jolie and Eva Mendes have reportedly formed a close friendship, bonding whilst their respective partners, Brad Pitt and Ryan Gosling, were working on 'The Big Short' together. 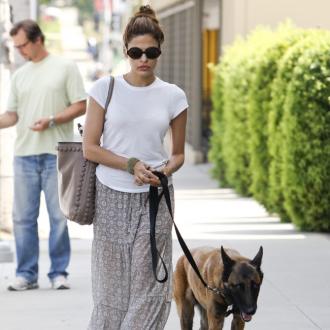 Angelina Jolie and Eva Mendes have formed a close friendship.

The stunning actresses reportedly bonded while their respective partners, Brad Pitt and Ryan Gosling, were collaborating on their upcoming movie, 'The Big Short'.

A source said: ''Angie and Eva started talking to each other when Ryan and Brad left to film in New Orleans.''

The 'Unbroken' director, who has six children, Maddox, 13, Pax, 11, Zahara, 10, Shiloh, eight, and six-year-old twins Vivienne and Knox, with Brad, is now extremely close to the 'Hitch' actress and has even given her tips on how to soothe her seven-month-old daughter Esmeralda's teething pain.

The insider added to America's Star magazine: ''They have a lot in common - not just as mothers but also with past personal issues.

''Both of them like to be alone, but ever since Eva had a baby, she's felt the need to get some advice from other moms, and when she met Angie they just clicked.''