Angel Haze Opens Up About Romance With Ireland Baldwin 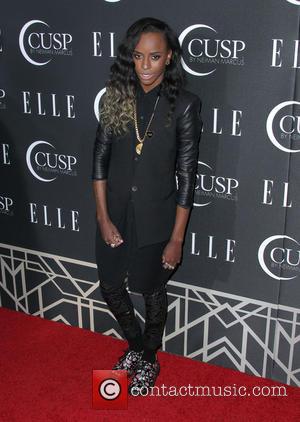 Picture: Angel Haze - ELLE's 5th Annual Women in Music concert celebration presented by CUSP by Neiman Marcus in honor of the magazine's May Women in...

Rapper Angel Haze has made it clear she is more than just friends with Alec Baldwin's daughter Ireland, insisting the couple is in love.

Model Ireland Baldwin, whose mother is actress Kim Basinger, had fans guessing about the status of her relationship with the bisexual hip-hop star in May (14), when she shared a photo of the pair locking lips and another image of her gazing at Haze, alongside the caption, "this is what they're always talkin' 'bout."

Haze, 22, has now opened up about their romance in a bid to convince some of the more conservative members of the press to stop referring to them as just "best friends".

She tells Britain's The Independent newspaper, "An interracial gay couple, I mean that's just weird right now. We f**k and friends don't f**k. I've never f**ked one of my friends. Once I see you in that way, it doesn't happen."

She has also credited 18-year-old Baldwin with helping to change her view on what real love is.

She continues, "When you find love it definitely amends your perspective on certain things. I was dating a guy I really liked about a year ago and being around him and realising so many things about myself totally made me hate the traditional ideas of what a relationship should be, of what romance should be.

"You go out and you're searching for this Utopian feeling, butterflies; that thing where you can't stop thinking about them. It doesn't have to be so overwhelming."

It appears Baldwin is bisexual as well - she started 2014 dating surfer Slater Trout. The couple went public with it's brief romance on the red carpet at a party to mark the 50th anniversary of the Sports Illustrated Swimsuit Issue in January (14).

Angel Haze Opens Up About Romance With Ireland Baldwin