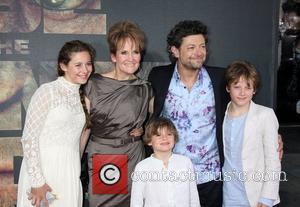 Picture: Andy Serkis and his family The premiere of 20th Century Fox's 'Rise Of The Planet Of The Apes' held at Grauman's Chinese Theatre - Arrivals...

Actor Andy Serkis has been "bombarded" with letters from several movie animators accusing him of taking too much credit for his characters in motion-capture films.
The Brit has found fame with a series of motion-capture performances, playing Gollum in the Lord of the Rings series and the title character in 2005's King Kong remake. He embraced the technology again this year (11) with roles in Rise of the Planet of the Apes and Steven Spielberg's The Adventures of Tintin.
But Serkis reveals he has fallen foul of some experts who combined visual effects with his movements and facial expressions to bring his characters to life.
He tells the Hollywood Reporter, "I've been bombarded by hate mail from animators saying, 'How dare you talk about 'your' character when all these people work on it after the fact? We're actors as well.' They are actors in the sense that they create key frames and the computer will join up the dots, carefully choreograph a moment or an expression and accent it with an emotion.
"But that's not what an actor does. An actor finds things in the moment with a director and other actors that you don't have time to hand-draw or animate with a computer."