Andy Serkis has revealed the 'Star Wars: The Force Awakens' plot to his wife. 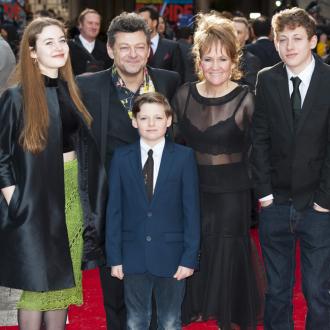 Andy Serkis has revealed the 'Star Wars: The Force Awakens' plot to his wife.

The 50-year-old actor has been sworn to secrecy over the upcoming blockbuster, but admitted his wife knows everything about the film because he practices his lines with her.

Questioned on whether he had let any plot details slip, he said: ''Well obviously my wife, Lorraine, you know, I'm not averse to telling her everything.''

When asked if he reads through his script with his actress wife Lorraine Ashbourne - who he has children Ruby, Sonny and Louis with - he continued: ''Oh yes, oh no, no, she knows the whole thing so if you really want to find out I can point you in her direction.''

Even the star's role in the movie - which has the full title 'Star Wars: Episode VII - The Force Awakens' - remains a mystery, although he insisted it has been easy to keep it a secret because he hasn't been able to give any information away about the film.

Speaking to Magic Radio at the Jameson Empire Awards 2015 - where he picked up the Best Actor accolade - he explained: ''I actually can't talk about anything so it's very easy [to keep it a secret]. I mean it's fantastic the effort that people go to to try and squeeze out just a little nugget but I, you know, what can I do, it's embargo. I think it's better for that, it's more exciting.''