After pioneering motion-capture performance as Gollum in the Lord of the Rings trilogy, Andy Serkis has pushed the art further with his Planet of the Apes trilogy

The Planet Of The Apes series of films concludes with War for the Planet of the Apes, which is told through the eyes of his character Caesar. Serkis has consistently said that this kind of performance is "no different" than any other kind of acting. "An actor in a performance-capture role receives a script, works on psychology, emotions, motivation, and goes on set to be shot in exactly the same way as any other character," he says. "That performance is used to cut the movie, and it's that performance that creates emotion, pace and drama. The visual effects render the character, just like putting on makeup, except here it happens after the fact. It's digital makeup if you will."

Serkis agrees that it's a collaboration between the actor and the visual effects team. "Of course there's this whole grey area," he says. "Who takes ultimate responsibility for the characters? But without question these characters are authored by what we do on set. They are not authored by animators. Animators do amazing work translating and interpolating the characters, the facial performances. But what we're creating on set, the emotional content of the scene and the acting choices in front of the camera, if they are not there on the day, they will never be in the movie."

Indeed, A-list actors are seeing the power of motion-capture technology, like Mark Rylance on BFG. And Serkis has directed a new version of The Jungle Book starring Cate Blanchett and Christian Bale. 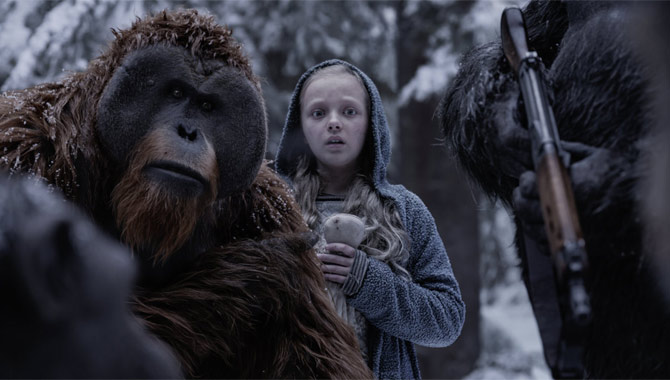 But he says that Caesar will always be one of his favourite roles. "I've played this character from an infant, which is very rare," Serkis says. "He essentially goes from chimp to human, starting to use sign language, becoming more upright. It's a subtle balancing act, because if you go too far on the human end, you can sound like an actor in an ape costume."

Indeed, the biggest difference this time is Caesar's mastery of language. "For Caesar now, the human word becomes his primary form of expression," Serkis says. "So that was a very big challenge for me personally in this movie in terms of charting the next version of Caesar - Caesar Part 3!"

But it's the future of performance-capture technology that excites Serkis. "The actor in the 21st century has a tool that enables you to totally transform into anything you want to play," he says. "It is the end of typecasting."

Watch the trailer for War For The Planet Of The Apes: