Andy Murray Enjoys The Perks Of The Job At Burberry Show 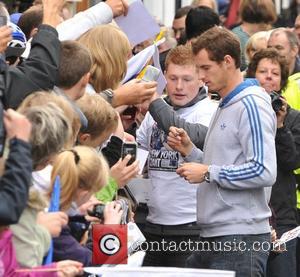 Picture: US Open champion and Olympic gold medallist Andy Murray returns to his hometown of Dunblane where fans turned out to cheer him and join...

Would Burberry have wanted Scottish tennis ace Andy Murray wandering down their red carpet at London Fashion Week had he not recently become US Open Champion? We have our doubts, though the 25-year-old seemed happy enough with the invite as he and girlfriend Kim Sears rubbed shoulders with fashion’s elite this week. Murray was actually given front row seats next to US Vogue editor and generally terrifying fashion person Anna Wintour, though he did seem a little uncomfortable. Elsewhere, Olympic gold medal cyclist Victoria Pendleton also attended the show, and was sure to insist that her front row seat was definitely not the product of her recent success, telling the Metro newspaper, “I’ve wanted so long to come to an event at fashion week, and Burberry have asked me for a couple of seasons and I’ve been so busy training that I had to say no.” Finishing off the all-star front row at the event in Kensington was hotshot American film producer Harvey Weinstein, ‘Slumdog Millionaire’ actor Dev Patel and One Direction singer Harry Styles. London’s five-day fashion extravaganza comes to an end on Tuesday (September 18th) with shows from the likes of Mulberry and Simone Rocha.