Girl Rising, a documentary focusing on female education and featuring narration from Anne Hathaway and Meryl Streep, will kick-start CNN's feature-length documentary series, the network announced on Monday (October 8, 2012). The movie, directed by Richard E. Robbins, follows seven girls around the world who seek to overcome obstacles and follow their dreams.

The new documentary division - CNN Films - will develop features that "examine an array of political, social, and economic subject matters," with deals already in place for documentarians Alex Gibney and Andrew Rossi to develop original features for the network. Its looks to be a pretty sweet gig for the pair - getting paid to go out and make documentaries without the need to find financial backing, or a distributor is pretty rare, though they know all about that. Both are Oscar-winning documentary makers, Gibney is best known for 'Taxi To The Dark Side, Enron: The Smartest Guys In The Room and Client 9, while Rossi's credits including Page One: Inside The New York Times and Fall Of Eliot Spitzer.

Girl Rising will air in the spring of 2013 with other movies following shortly afterwards. While the films will initially air on CNN, the network has plans to enter them in international film festivals and distribute them to theaters, according to TVGuide.com.

Page One: Inside the New York Times Trailer

The New York Times is the third largest newspaper in the United States and this documentary follows a year in their Media department. All over the country, daily newspapers are seeing a decrease in readers - some are even claiming bankruptcy and folding - thanks to the Internet and social networks such as Twitter and Facebook and their ability to report breaking news as it happens. Even the New York Times - nicknamed "The Grey Lady" - has seen circulation fall since the 90's.

Continue: Page One: Inside the New York Times Trailer 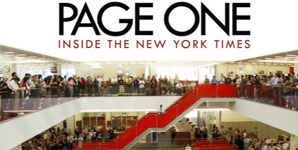 Page One: Inside the New York Times Trailer

The New York Times is the third largest newspaper in the United States and this...