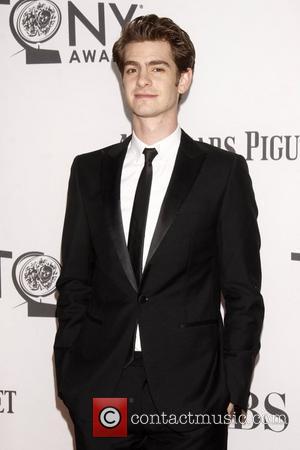 The world premiere of The Amazing Spider-Man has taken place in Tokyo. Andrew Garfield (Peter Parker / Spider-Man) was present at the red carpet event, along wit his girlfriend and co-star Emma Stone. The event kicked off in style, with a stuntman dressed as Spidey scaling a wall into a giant web.
Fans at the premiere told Reuters what had drawn them to the world's first showing of The Amazing Spider-Man. 23 year-old Keita Fukushima told them he was interested in seeing how the new role of Gwen Stacy works out, adding "I came to see Emma (Stone), she's gorgeous." Eight year-old Yu Suguro arrived at the premiere wearing a red Spider-Man costume and had come to see his hero: "I love Spider-Man," he told reporters. Tokyo was a wise choice of location for the movie's world debut; Japan was the top overseas market for the first two films in the modern comic book adaptation franchise.
As for the movie's main star, he took a moment on the red carpet to explain what attracted him to the role. "Spider-Man has always been the only teenage superhero, and the most human one in my humble opinion, and that's just one of the things that sets him apart. he's all too human, that's what's wonderful about him." The movie opens on limited release on Japan on June 23, 2012 before getting its North American release on July 3.