Andrew Garfield was attracted to Emma Stone from his first ever screen test with her on the set of forthcoming movie 'The Amazing Spider-Man'. 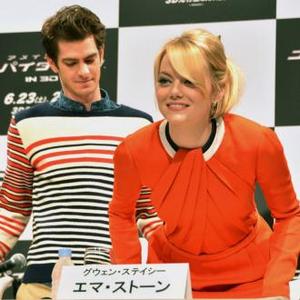 Andrew Garfield was attracted to Emma Stone from his first ever screen test with her on the set of 'The Amazing Spider-Man'.

The 28-year-old actor - who plays Spider-Man/Peter Parker in the film - has started dating Emma (Gwen Stacy) in real life since the pair filmed their male and female lead roles in the forthcoming movie, and he could tell there was a special sort of chemistry between them during filming.

He said: ''We got on really well as people, in between takes. That was the fun stuff. In between, we'd just mess around, and I felt, 'Ah, this is different.' I wasn't really aware what was happening in the screen test.

''She keeps you on your toes, and that wakes you up. That was the beginning. Obviously I was so happy that she got the role and decided to do it.

''It's like in life ... you can either sense if you guys have a kind of chemistry or rapport right away no matter what the relationship. Whether it's love interest or not.''

Andrew found it helpful to have Emma on the set to help him relate to his character and enjoy his alter-ego's love scenes.

Speaking to MTV News, he added: ''Those are The Days I'd look forward to, you know? For Peter as well, because Peter goes through some horrible stuff in the movie.

''There's some joy to be had when experiencing his first love.''