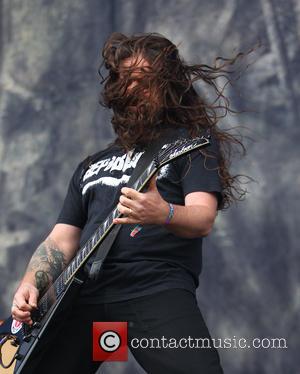 SEPULTURA star ANDREAS KISSER has confirmed he has stepped in to replace new dad Scott Ian on a run of Anthrax shows in Europe.
The Brazilian guitarist made his debut with Anthrax at a Big Four festival show in Gelsenkirchen, Germany last Saturday (02Jul11) and admits he's thrilled to be Ian's temporary replacement as he gets used to fatherhood.
Ian and his wife Pearl Aday welcomed son Revel three weeks early last month (Jun11), prompting some fans to think the guitarist would hit the road with the band - but Ian has chosen to sit out of 11 shows in July (11) to spend time with his family.
Speaking to RockAaa.com backstage at the U.K.'s Sonisphere festival on Friday (08Jul11), Kisser admits it's a dream come true to be touring as a member of Anthrax with Metallica, Slayer and Megadeth.
He says, "All the four bands here are the Dna of my guitar playing. I started listening to them, the heavier music, and I wanted to play the same. They were my teachers.
"I don't think I (could have) dreamt something like that to happen. And the good thing is it's a very positive situation. Scott is not sick... It's very, very positive. It couldn't be better. So I'm very honoured to be here, by these guys, and jam. We're having fun."
Scott Ian is expected back onstage with the band for their Heavy T.O. festival appearance in Toronto, Ontario on 23 July (11).